Ok, I’ll be honest I’m also a member of other POD sites like zazzle, society6 and redbubble… And with that last one I have a problem… which might also be an issue in my Spreadshop and spreadshirt shop.

The included images are deleted in my Redbubble webshop due to a complaint about intellectual property by the Piaggio group. These images are also for sale in my Spreadshop and spreadshirt shop.

This is the email from Redbubble:
We’re sorry, but we had to remove your artwork from the Redbubble marketplace, because it may contain material that violates someone’s rights. The owner of these rights has provided us with guidance describing the type of content they consider infringing that should be removed from the marketplace. In most cases, this means that the rights holder did not specifically identify your work for removal, but that Redbubble has detected potential similarity between your removed work and one or more words, phrases or images included in the rights holder’s removal guidance.

I don’t get this … because this drawing has nothing to do with “Piaggio”. Ok, they sell scooters… but how can this cartoon drawing offend any intellectual property of Piaggio? There is no scooter from this company who looks like the scooter on my drawing. When I made this drawing I had never heard of Piaggio. It could be any scooter from any company.

If I draw a red cartoon car, will Ferrari tell me that I offend their intellectual property because it’s a red car? Maybe it’s Piaggio who offend my rights.

I have tried to send an e-mail to Piaggio but haven’t received a reaction.

So as this drawing is also for sale in my shops overhere, I want to know the opinion of Spreadshop and Spreadshirt on this case. 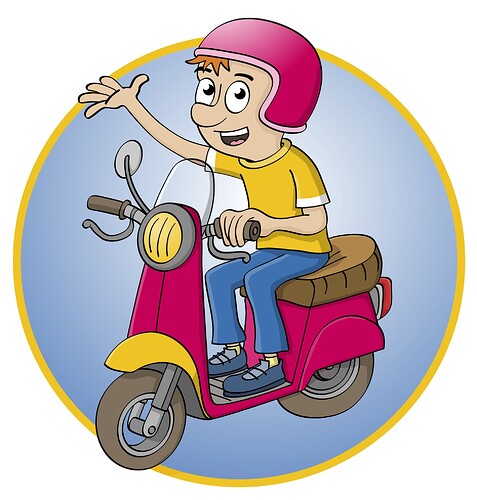 I agree with you, it makes no sense …

Well, that is interesting cause I thought Redbubble is more like “We don’t give a f**k about anybody’s rights”. There are so many copyright infringements on the side that your problem, especially regarding this special design, sounds ridiculous. I don’t see the problem here, too, but that doesn’t count, as the company decides and you won’t do much about it.

Regarding Spreadshirt, I don’t think that they can give you proper legal advice on how to handle a problem with Redbubble.

Thanks for your reply. Of course I don’t want legal advice for Spreadshop. I was just wondering how Spreadshop would act in this case if Piaggio would contact them.

I have spoken to some people with the same problem. It looks like Redbubble deleted every image with a scooter, just to be safe. As if they use an atomic bomb to kill some mosquitoes.

I was just wondering how Spreadshop would act in this case if Piaggio would contact them.

so if i say your work infringes my rights they will take all your work offline?

If you’re a big company that’s assumed to hold the rights to anything (word, word-picture, pattern, designs, etc.) and everything and you don’t want to stress about cease-and-desist letters, then that would probably happen.

But if you are just a poor little individual, then you have to prove yourself that you are the rights holder and take care of the enforcement of your rights.

But if you are just a poor little individual, then you have to prove yourself that you are the rights holder and take care of the enforcement of your rights.

I am a poor little individual and had no problem to have illegal copys of my work removed from RedBubble and Spreadshirt.
@StefRingoot: did you contact the support? Surely you are a victim of an automatic image recognition that marks everything looking like a scooter. I could imagine that a human being will not have a closer look until someone objects.

Yes I contacted them. They can’t help me. I also emailed Piaggio and contacted the CEO of Piaggio in my LinkedIn account. No response.

However I got a reaction from spreadshop. “At the moment there is no problem with the design”

I deleted my Redbubble account. Never sold one thing. Sold a lot on Spreadshop en spreadshirt. They do a way better job

Sorry about that.
Spreadshirt acts the same way whenever a company claims the property of certain designs and keywords. Right now the deactivated all designs with a guitar in my US account, no matter what shape I used.
Users upload designs in absurd numbers every day and they platforms react by deleting stuff. No side cares, neither those who replace the deleted stuff imediately nor those who don’t even look at what they delete.
Dinosaurs like us who put an effort in a single illustration are collateral damage.

I am aware of that no worry’s

I can’t give you any advice or answer to this question here on the forum. If you have any questions about a motif, the only way is to send an email to the colleagues at legal@spreadshirt.net

Redbubble will flag designs according to the keywords.
I had a photograph of stars, that is named “Pacman nebula” and Nintendo filed for infringement. It’s automatic.

Did you put “Vespa” as a keyword?
If yes, this is why.
You can change the colors to red and green, add a Christmas hat and reupload with no brand keyword. See how it goes.

I had 3 designs that were parodies of the Superdry vintage logo; they only removed the one with “super dry” in the keywords.
Spreadshirt removed anything that could look like a logo

The keywords are the problem indeed!

I found out (how could I have forgotten that) that I posted a second almost similar design with other key words and they didn’t delete that one.

So only the keywords are used to judge… it’s an automated proces. Even my objection received an automated answer.