Not suitable for cross-country publishing

I find this a bit disappointing, even discriminating… Because of the word “bateau” which in this case is a design choice. Not something you need to read to understand the illustration.

I am from Holland, this is a French word, I am posting on the dutch site and almost everyone understand this word. There is even a shop in my town called “le Bateau”. Due to the fact that this design “is not suitable for cross country publishing” I can’t post this French word in the French part …. Strange…

So in this case I disagree with the decision of your design team. 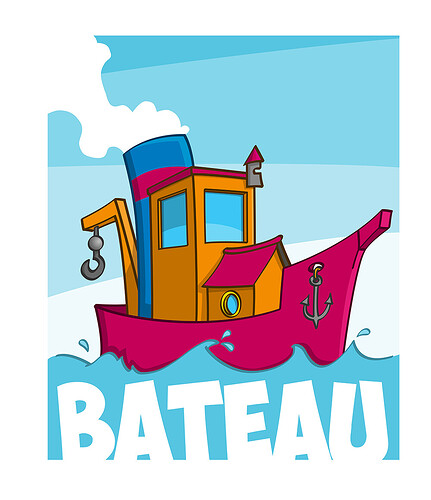 You have already mentioned the error yourself: You uploaded a French design in a Dutch account.
The check showed that there is French text in your design, which is why global publishing is disabled. This means that your design with French text is only available in the marketplace where you uploaded it. This is of course inconvenient, but there is currently no other solution.

You should better upload an English version in parallel, which can then be released for global publishing.

You should also consider the following. If you have a Dutch account, you should only use Dutch terms, titles, descriptions and keywords - no terms in any other language. Otherwise, even if your designs have been approved for global publication, they may not be translated correctly or at all, which means that they will not be available on the other marketplaces.

I hope I was able to help you.

It’s very inconvenient @Rico_Spreadshirt …. I hope there will be a solution for this “problem” in the future. In my opinion this rule is ridiculous…

Of course I can make my design in English, but the word “bateau” is a design choice… there is no need for translation!

In my opinion there are a lot of problems with this rule.

I can make a design in English so this means I can sell it everywhere. Also in France, Italië, Switzerland, Poland, etc… however a lot of people in these countries don’t speak English… (ever tried to speak English in France?)

If I make a French design I can only sell it in France…. However I live in the Netherlands… but I am originally from Belgium…. In Belgium we speak al lot of languages Dutch, French, German… and in Holland most people understand French words.

And in this case the word Bateau is even used in the USA; see In the southern United States, the term is still used to refer to flat-bottomed boats, including those elsewhere called jon boats .

Other POD sites don’t make a problem of this…

And what about this design @Rico_Spreadshirt? It is in English but not suitable for translation…?

In your particular case it is of course unfavourable. But you must not forget in your considerations that we have to offer solutions that work for most cases and, above all, that work correctly for most cases.
For example, there are relatively more French speakers of English in France than French speakers of English in England.
English is internationally recognised, even if of course not everyone speaks English. Nevertheless, this is the rule that works for most domains.
When you start making an exception for a word, even if it is well justified, where do you draw the line? That’s why I ask you to simply accept the given framework conditions.
However, I can tell you that we are currently working on making it possible to offer a French design in France on a Dutch account. Of course, the French design will still not be published for all domains, but at least on one target domain.
I hope this solution will be a little more convenient for you. However, I cannot yet say when this feature will be released. It is technically not that easy.

Please contact our colleagues at legal@spreadshirt.net to ask about that status.